On March 12, the World Day Against Cyber-Censorship, media and civil society organizations in Philippines held a demonstration in front of NCERT (National Computer Emergency Response Team) to protest against the negligence of the NCERT to support the investigation of the three months’ long Distributed Denial of Service attacks against regime critical media and civil society organizations in the Philippines. 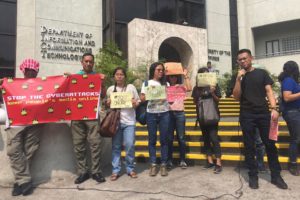 It is the first time in history that civic groups hold a protest against a national CERT for not performing their duties. For more than three months, cyber attacks have targeted Philippine independent media such as Bulatlat, Kodao Productions, Pinoy Weekly, Manila Today, Altermidya and  the National Union of Journalists of the Philippines.

Since the attacks only target regime critical sources, they are likely to be politically motivated and perhaps even state supported.

Qurium Media Foundation, a non-profit digital solutions provider, is assisting the organizations that are under persistent and intense DDoS attacks and is hosting a handful of them.  As a member of CiviCERT, a Computer Incident Response Center for Civil Society, Qurium has reached out to NCERT (the national CERT of the Philippines) to request assistance to investigate the attacks, which were sourced from Philippine infrastructure. Despite three attempts from CiviCERT to reach NCERT by email, no response has been received.  According to NCERT’s operations manual, they are required to notify an international reporter (like CiviCERT) within 48h if a request is regarded as “false alarm”. If the request is deemed as valid, a forensics analysis must  be initiated.

Due to the lack of response from NCERT, Qurium has opened a digital forensic investigation to attribute the attacks. The investigation has not yet been published, but is expected to be released later this month.

These attacks are in fact part of a series of attempts to stifle press freedom here as seen in the recent arrest of long-time journalist Maria Ressa and several threats that no less than the president himself issued against dominant news agencies Philippine Daily Inquirer and ABS-CBN, says Bulatlat.

On 13 February Maria Ressa, one of  TIME Magazine’s Person of the Year 2018 and CEO of the news site Rappler, was arrested on charges of cyber libel, stemming from a story that linked a businessman, in illegal drugs and human trafficking, to former Supreme Court Justice Renato Corona. Ressa was released on 14 February.

Bulatlat adds in its statement; “Statistics, too, can speak for itself on the dire situation of press freedom in the Philippines. There are now 12 journalists killed under President Duterte. The National Union of Journalists in the Philippines has documented 85 cases of threats and intimidation against journalists as of November 2018.”